Due to current health concerns, the upcoming REO Speedwagon concert with special guest Night Ranger has been rescheduled to Friday, November 12th, 2021.
Previously purchased tickets will be honored for the new date. Tickets are on sale now.

REO Speedwagon is coming back to Prescott Valley with special guest, Night Ranger! Formed in 1967, signed in 1971, and fronted by iconic vocalist Kevin Cronin since 1972, REO Speedwagon’s unrelenting drive, as well as non-stop touring and recording jump-started the burgeoning rock movement in the Midwest. Platinum albums and radio staples soon followed, setting the stage for the release of the band’s explosive Hi Infidelity in 1980, which contained the massive hit singles “Keep On Loving You” and “Take It On the Run.” That landmark album spent 15 weeks in the No. 1 slot and has since earned the RIAA’s coveted 10X Diamond Award for surpassing sales of 10 million units in the United States.

Today, REO Speedwagon has sold more than 40 million albums around the globe, and Cronin and bandmates Bruce Hall (bass), Neal Doughty (keyboards), Dave Amato (guitar), and Bryan Hitt (drums) are still electrifying audiences worldwide in concert with hits and fan-favorites such as “In Your Letter,” “Can’t Fight This Feeling,” “Time For Me To Fly,” “Roll With The Changes,” the aforementioned “Keep On Loving You” and“Take It On the Run,” and many, many more.

With more than 17 million albums sold worldwide, over 3500 live performances, and a radio audience that exceeds 1 Billion. Night Ranger has both epitomized and transcended the arena rock sound and style well beyond that era. With multiple songs that have significantly impacted popular culture, Night Ranger continue to expand their ever-growing fan-base. The band is proof that powerful songs, plus accomplished musicians is the perfect formula for continued success.

Night Ranger has earned widespread acclaim, which includes multi-platinum and gold album status while leaving their indelible mark on the music charts with a string of best-selling albums (Dawn Patrol, Midnight Madness, 7 Wishes, Big Life and Man In Motion). Their popularity is fueled by an impressive string of instantly recognizable hit singles and signature album tracks, including legendary titles such as "Sister Christian", "Don't Tell Me You Love Me", "When You Close Your Eyes", the anthemic "(You Can Still) Rock In America", along with "Sentimental Street", "Goodbye", "Sing Me Away", and "Four in the Morning". Night Ranger is Jack Blades (bass, vocals), Kelly Keagy (drums, vocals), Brad Gillis (lead & rhythm guitars), Eric Levy (keyboards) and Keri Kelli (lead & rhythm guitars).

NIGHT RANGER VIP PACKAGES - ONLY AVAILABLE ON THEIR WEBSITE 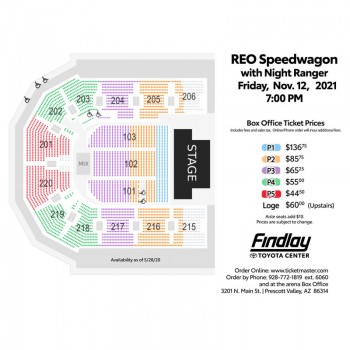