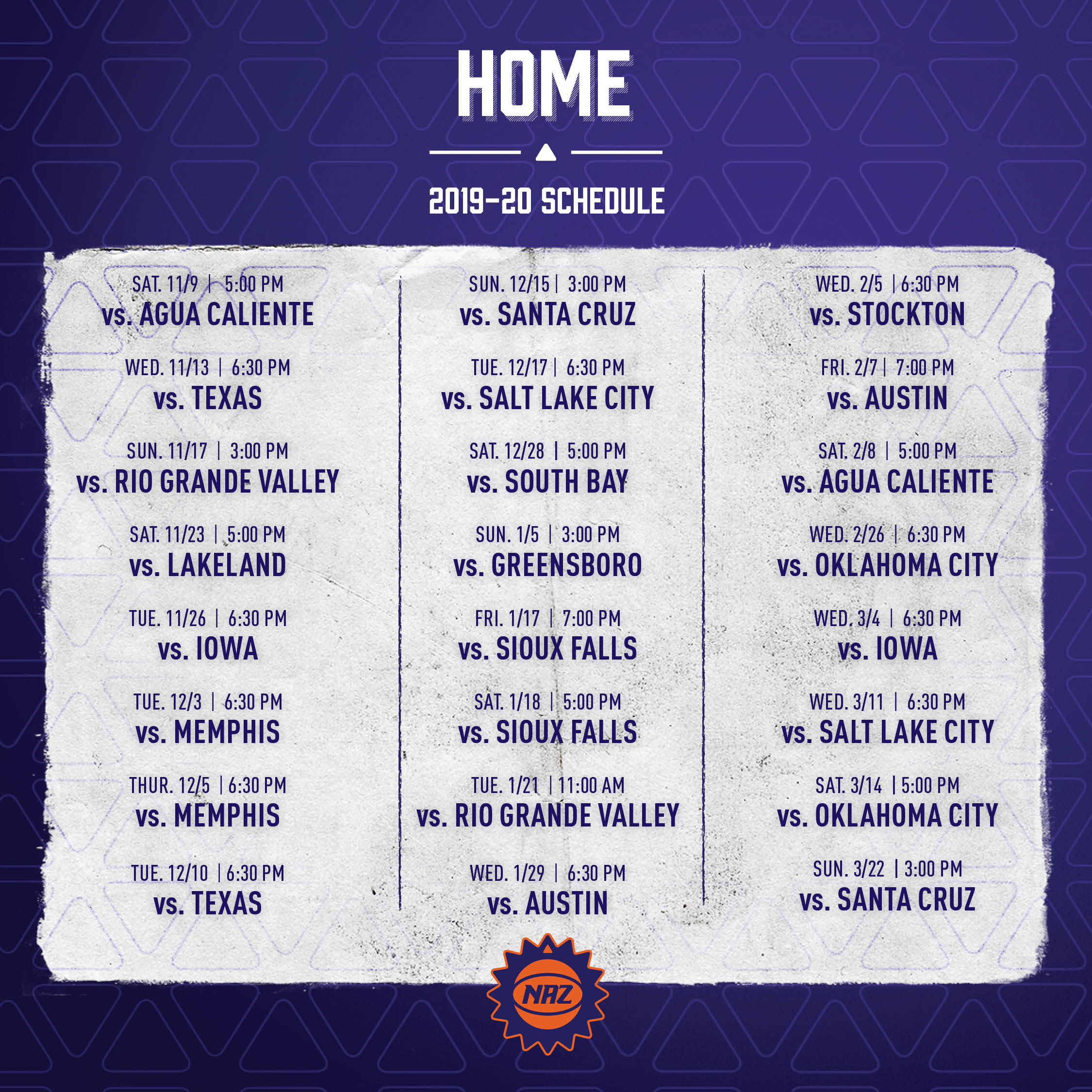 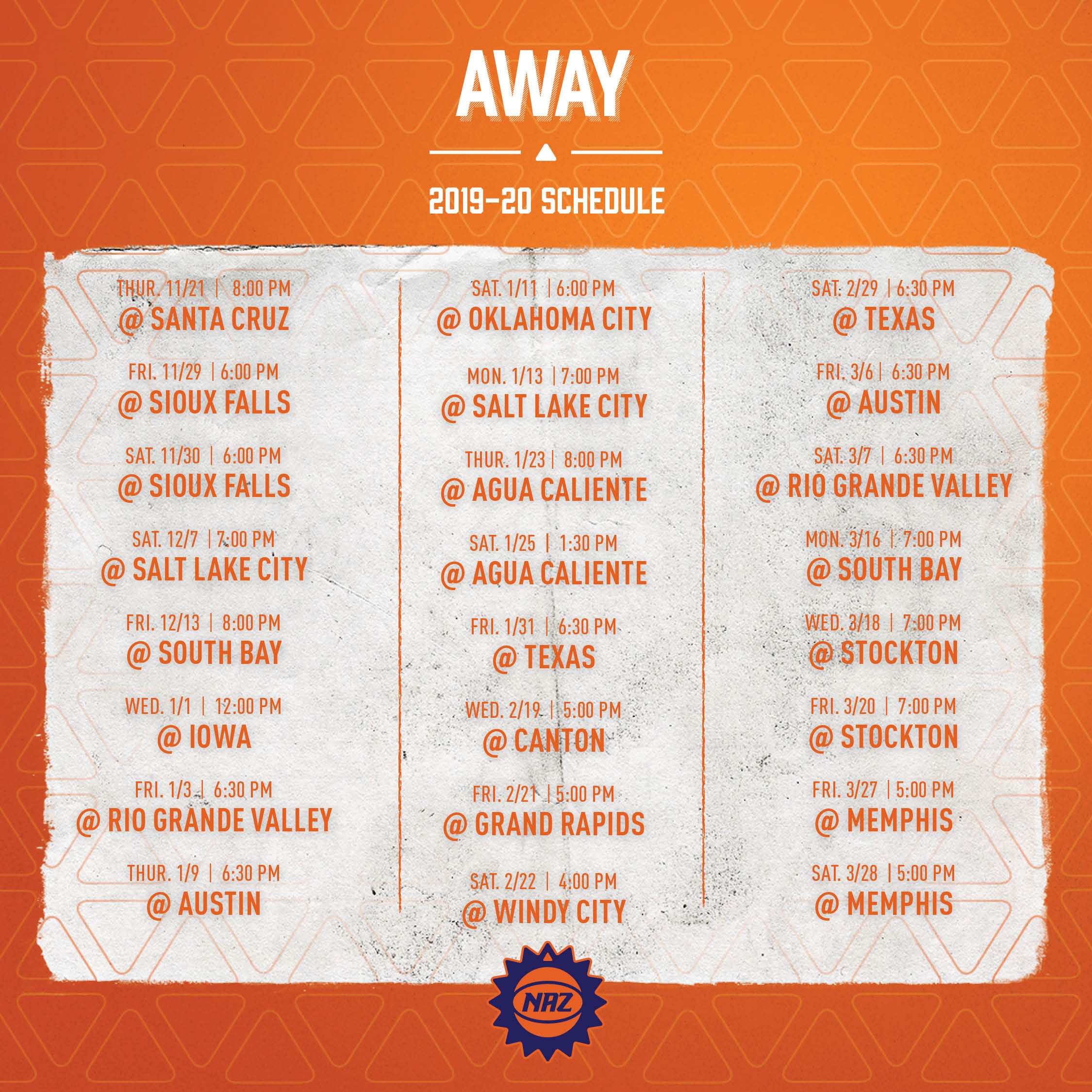 The Suns’ 50-game regular season slate will begin at home, when the team faces the Agua Caliente Clippers on Saturday, Nov. 9, at 5 p.m. at the Findlay Toyota Center. This will be the fourth straight year the Suns open the regular season on their home floor, and second time in three seasons the matchup includes the Clippers. Last year in the teams’ first meeting, the Suns won on a three-point shot as time expired.

Northern Arizona will play its first three games of the season at home before hitting the road for the first time on Nov. 21 at the Santa Cruz Warriors. Eleven of the Suns’ first 16 games will be at the Findlay Toyota Center, while 11 of their final 16 games will be on the road. Last season, the Suns played eight of their first 13 games on the road and ended the year with a six-game homestand.

The Suns will hold three separate three-game homestands, their longest of the year, including their opening slate. Of their 24 home games in Prescott Valley, Arizona, 12 will be on Friday-Sunday, and 12 will be on Monday-Thursday. The Suns’ longest road stretch will be three games, twice, the first set from Feb. 19-22 and the second from March 16-20. To end the year, the Suns will play back-to-back games at the Memphis Hustle on March 27-28. A record 28 teams will play in the NBA G League this season with the College Park Skyhawks joining the mix.

The Suns will get their first visit from the reigning league champion Rio Grande Valley Vipers on Sunday, Nov. 17. Head coach Bret Burchard will face off against former NAZ Suns head coach Ty Ellis and the Stockton Kings three times in 2019-20, the first meeting at home on Feb. 5. The Suns will play six back-to-back sets in 2019-20, a reduction from eight in 2018-19. Two of the back-to-back sets will feature the Sioux Falls Skyforce, with the Suns on the road for two on Nov. 29-30 and at home for two on Jan. 17-18.

The NAZ Suns’ schedule can be found at www.nazsuns.com/schedule.

This year Findlay Toyota and the NAZ Suns are partnering to give away a co-branded, wrapped car.  Raffle tickets may be purchased at any regular-season home game for just $10 at the Findlay booth on the concourse.  Fans can purchase as many raffle tickets as they would like.  The winner will be randomly selected and announced during our last game of the season on March 22.  Must be present to win.

Fans who purchase a raffle ticket will also be entered into a nightly drawing that will be selected and announced during the 3rd quarter of each game.  Their gift may be picked up at the team shop.  The gift options will change weekly and are provided by Findlay Toyota and their partners. We will be sure to provide you with the winning number for the nightly raffle just in case anyone stops by with questions.

NAZ Suns will raffle off a game-worn autographed jersey during each Saturday home game.  Raffle tickets may be purchased for $1 at the team shop.  Fans can purchase as many raffle tickets as they would like.  The winner will be randomly selected and announced in the 4th quarter.

Post-game autographs will be offered after each home game! Two players will be selected and sign autographs on the concourse at our NAZ sales tent location. During our Sunday Fun Day games, we will still feature autographs but the location will be moved courtside.

NEW FOR THIS SEASON!

Floor seats for single games can be purchased at the box office.  Floor tickets include access to the buffet.

PLEASE NOTE: Student pricing is just $9 in all bowl seats. Children 24 months and under do not need a ticket if sitting on a lap.

GET YOUR TICKETS NOW! 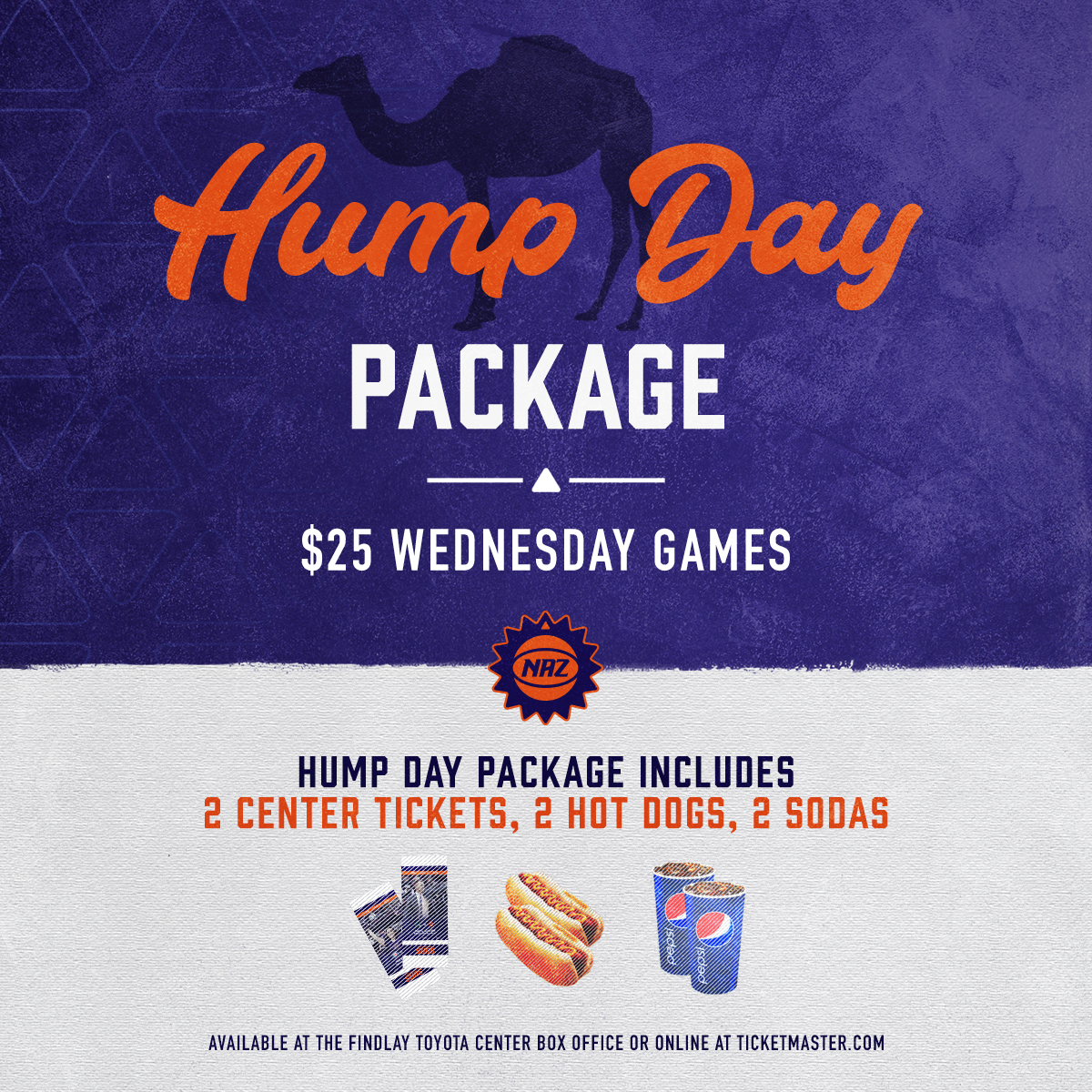 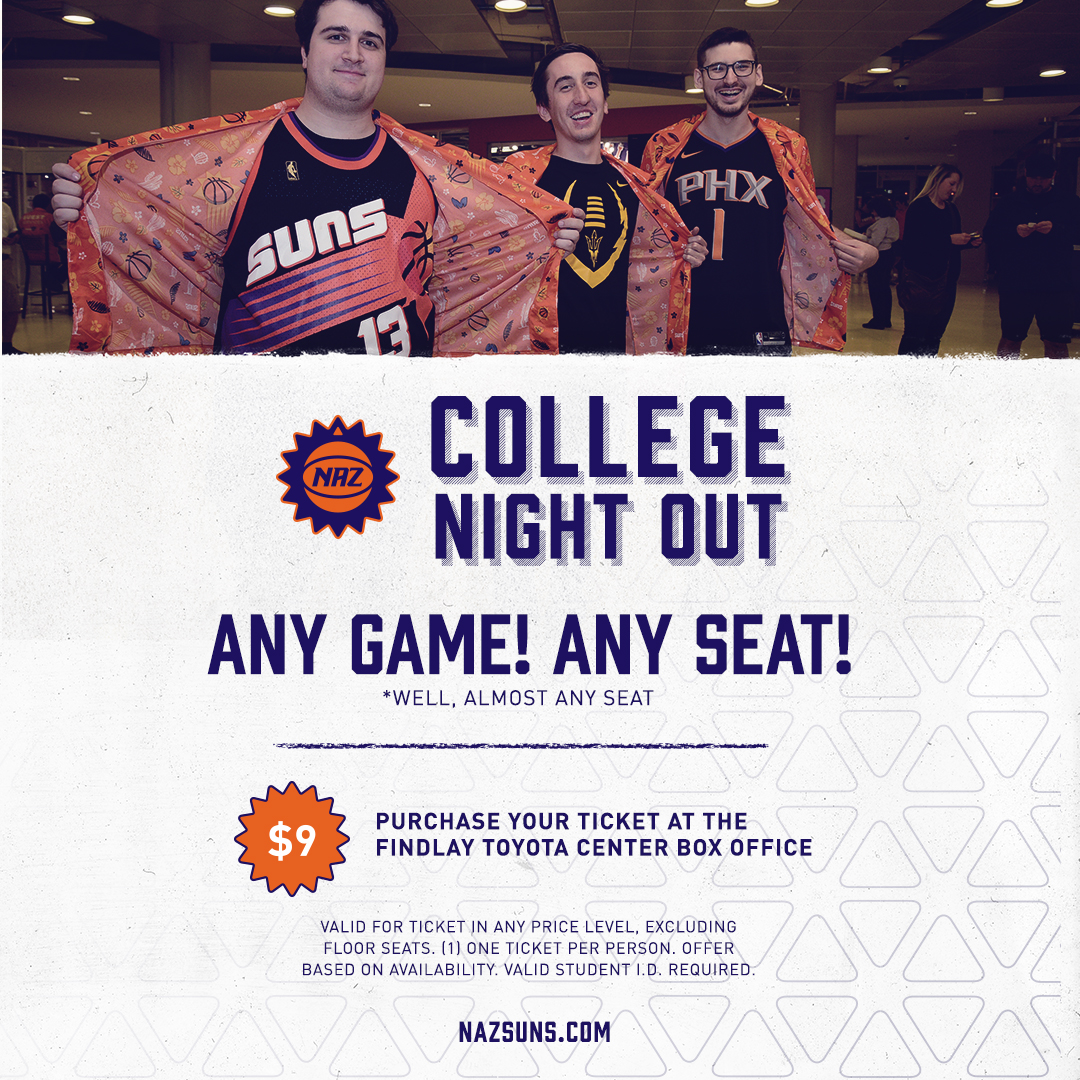 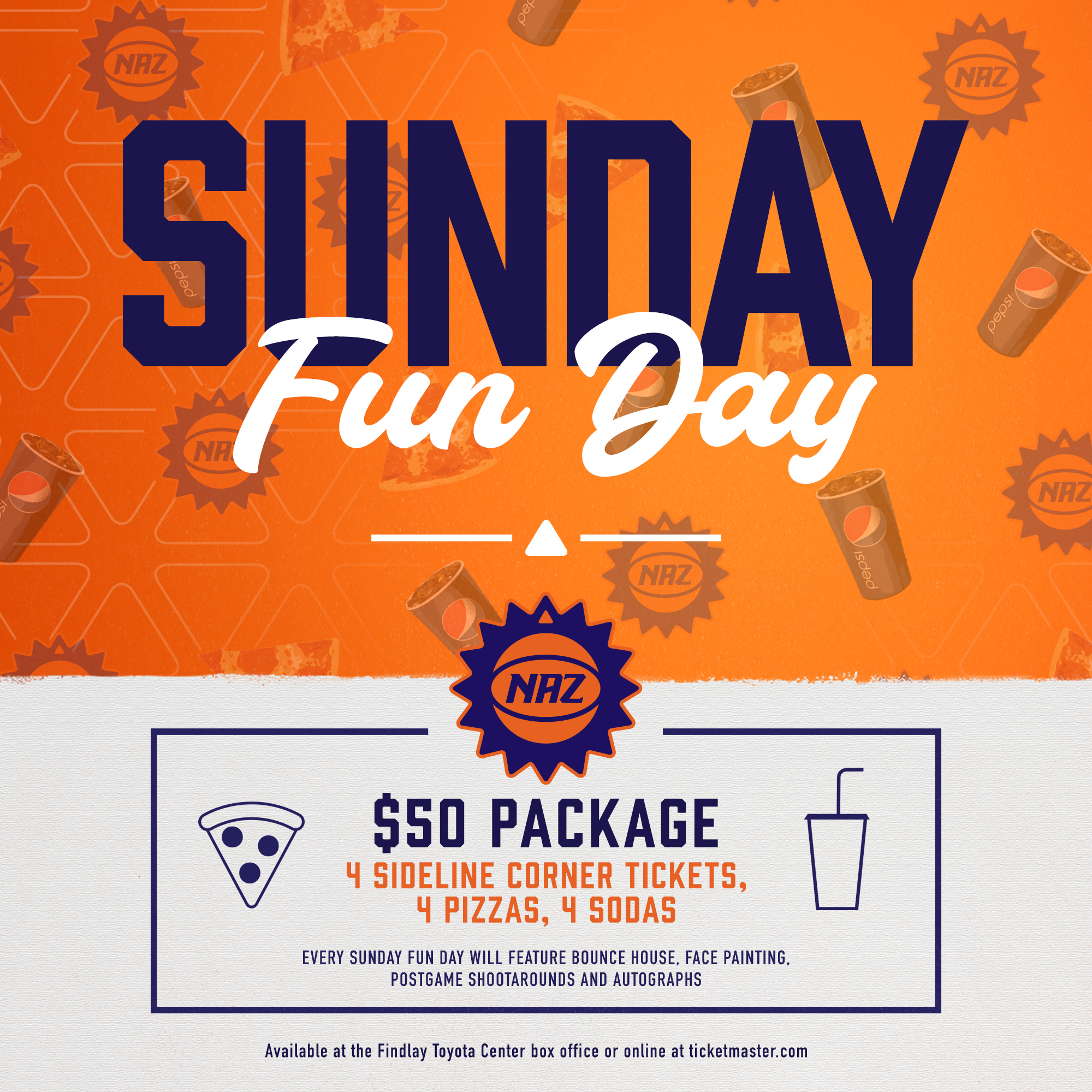 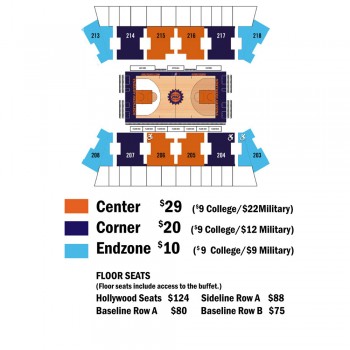